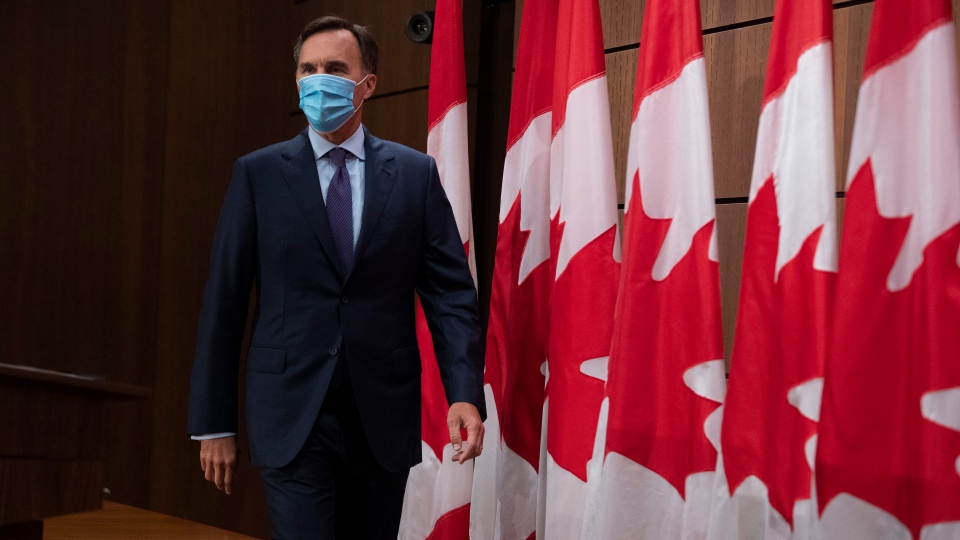 TORONTO — Bill Morneau, Canada’s finance minister, is stepping down amid the ongoing scandal of accepting gifts from WE Charity and rumours of a growing rift with Prime Minister Justin Trudeau.

Morneau, who has held the post for five years, announced his resignation Monday evening in a press conference from Ottawa. He will give up both his cabinet role and his seat as member of Parliament for Toronto Centre.

He announced he will make a bid to become secretary general of the Organization for Economic Co-operation and Development (OECD).

Morneau said he told Trudeau he wasn’t going to run in the next federal election and that he only ever intended to serve in two governments. He said now is the “right time for a new finance minister” to manage a “long and uncertain” recovery as Canada rebuilds from the economic downturn brought on by COVID-19.

Morneau denied he was asked to quit or was otherwise forced out. Instead, he said that he had come to the conclusion he was no longer the “most appropriate person” for the job of finance minister because he wasn’t going to be there for the long haul.

He also dismissed speculation of strife between him and the prime minister leading to his decision to quit. He said his relationship with Trudeau was built on “vigorous discussion and debate” but that always led to better policy. Serving as finance minister was “the work of a lifetime for me,” said Morneau.

In a statement, Trudeau said Morneau “worked relentlessly to support all Canadians and create a resilient, fair economy that benefits everyone.”

He said Canada would “vigorously support” his bid to lead the OECD.

“I want to thank Bill for everything he has done to improve the quality of life of Canadians and make our country a better and fairer place to live. I have counted on his leadership, advice, and close friendship over the years and I look forward to that continuing well into the future. Bill, you have my deepest gratitude and I know you will continue making great contributions to our country and for Canadians in the years to come.”

Canadian business leaders also thanked Morneau and his “commitment to sound public policy over the past five years in extremely challenging circumstances,” and expressed support for his OECD bid, in a statement by Goldy Hyder, president and chief executive of the Business Council of Canada.

But opposition parties wasted no time taking aim at Trudeau.

“At a time when Canadians are worried about their health and their finances, Justin Trudeau’s government is so consumed by scandal that Trudeau has amputated his right hand to try and save himself,” he tweeted.

“In the middle of a financial crisis, Justin Trudeau has lost his Finance Minister,” tweeted NDP Leader Jagmeet Singh. “Every time he gets caught breaking ethics laws, he makes someone else take the heat. That’s not leadership.”

Reports have swirled for weeks that Trudeau and Morneau were at odds over the charity scandal, environmental initiatives, and pandemic relief spending. Morneau has been in the crosshairs of opposition parties since the WE Charity scandal broke last month.

WE Charity, which was granted a contract worth up to $43.5 million to deliver a now-cancelled $912-million student grant program, partly paid for two trips for Morneau’s family members to Kenya and Ecuador, including one trip he took part in himself.

Morneau said he made an “error” and intended to cover the cost of the trips. He then cut a cheque for $41,000.

Canada’s ethics commissioner is now investigating both Morneau and Trudeau for not recusing themselves from decision-making around the contract, given their family connections to WE Charity.

NDP ethics critic Charlie Angus said it was “absolutely clear” Trudeau needed to change the focus ahead of the ethics commissioner’s report. He noted that Trudeau had done “a very good job” of reassuring Canadians during the pandemic, but got sidetracked by the WE scandal.

“This has really damaged the prime minister. They’re trying to find a way to put a Band-Aid on it, so they’re using the dog days of August. But the fact that a finance minister in the biggest economic crisis in a century has to walk the plank … we’re in uncharted territory here,” said Angus.

Lori Williams, a political science professor at Mount Royal University in Calgary, told CTV News Channel that the resignation is a case of Morneau “falling on his sword for the sake of the party and for the government.”

She said it’s possible a deal has been struck in which Morneau can take on a role with the government down the road. But his removal won’t be enough for a “reset” for the government. The next step — finding a replacement — will be crucial, she says.

Speculation will now begin about who will take Morneau’s place, but there has been plenty of talk that former Bank of Canada governor Mark Carney, who has been seen as a highly coveted potential politician, has had the ear of Trudeau about the best course for economic recovery.

Williams says it’s “tricky” to appoint a cabinet minister who hasn’t been elected to Parliament, but it has happened before.

“If Trudeau is going to look at a Mark Carney, he’s got a riding Mark can run in, and at the same time, he can as prime minister, appoint him directly as minister of finance,” Geoghegan told CTV News Channel.

“The other more conventional scenario that has been discussed is taking a cabinet member like Chrystia Freeland and putting her in as finance minister. Certainly this is a significant shake-up to the Trudeau government.”

Sources told CTV News, however, that Mark Carney will not be taking over as finance minister.

Morneau, who grew up in Toronto and holds a masters of economics degree and an MBA, led human resources firm Morneau Shepell, founded by his family, between 1990 and 2015. He is married to Nancy McCain, whose family owns McCain Foods.

He was the first political rookie to take on the crucial finance minister role since 1919.

This is not the first time Morneau has come under fire for ethics issues. In 2017 he faced criticism and questioning over using an ethics loophole to not put his assets in a blind trust after becoming a minister, which the then-ethics commissioner cleared him on; as well as for not disclosing a family villa in France.

Conservative strategist Jamie Ellerton told CTV News Channel that the PM “savaged his finance minister over the past couple of weeks” with “constant leaks” aimed at destroying his credibility and reputation that forced him to resign.

He said there is “political blood in the water” and that opposition parties will be even more focused on hammering the Liberals over the WE Charity scandal.

Man in his 60s dead after tornado causes...

As the U.S. sends more Moderna doses to...